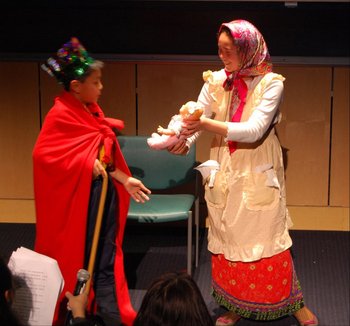 Learning Through Interaction
•To provide an enriching environment and engaging curriculum that immerses the children in Chinese language and culture through social interactions and meaningful activities.
•To allow students to acquire the Chinese language and literacy skills through songs, poems, chants and stories and attain Chinese fluency and the disposition to be life-long learners.
•To provide a wide range of learning activities related to Chinese culture and history in addition to Academic Chinese lessons, such as Chinese calligraphy, art and crafts, cooking class, and field trips.

Michael Roemer had never lived abroad before he took a one-year leave of absence from his job as an attorney, rented out his family's Orinda, Calif., house, and moved to Chengdu, a city in western China, in 2010 with his wife and two children.

Mr. Roemer's goal: to give his kids, Erin and Conor, an up-close look at China and an edge in what is fast becoming a must-learn language. "Speaking Mandarin is important," says the 57-year-old Mr. Roemer.

The Roemers are among a growing group of Westerners going to great lengths to give their kids a leg up in Mandarin. With China's rising global influence, these parents want their children to be able to communicate fluently with the country's 1.3 billion people. The phenomenon is similar to what happened in the '80s, when Japan's economy boomed and there was a rush to learn Japanese.

Some high-powered parents want their children to learn Mandarin, going so far as to packing up the family and moving to China. Emily Nelson has details on Lunch Break. Photo: Joanne Lee-Young.

But this time, after-school classes aren't enough for some people. Families are enrolling their children in Mandarin-immersion programs that are springing up from California to Maine. They are hiring tutors, Skyping with teachers in Beijing and recruiting Chinese-speaking nannies. Some are stocking their playrooms with Disney videos in Mandarin—not to mention the iPhone apps aimed at making kids into Mandarin speakers.

Of learning Mandarin, Mr. Roemer says, "mastering that challenge gives [the kids] a great deal of confidence." Learning Chinese, he adds, is "good for the brain." Still, he says it was stressful watching his children struggle in a place where at first they didn't understand much of what was happening at school.....more......